First published in May 2018, I re-post this following further interest in praying the Little Hours.

At Plum Village, the Buddhist monastery founded by Vietnamese teacher Thich Nhat Hahn, when a clock strikes or a gong sounds, everyone stops, breathes deeply and remembers a brief gatha or mindfulness verse:

to my true self.”

We human beings are forgetful, half-asleep creatures. Mindfulness is nothing more than waking up, becoming attentive and aware. You can download a mindfulness bell to sound on your computer. I used to have it ringing in my office when I was a Headteacher, an old fashioned chiming clock can serve the same purpose. Stop and breathe deeply three times.

The Christian tradition, too, has many ways to remind us to stay awake. One of these is the Liturgy of the Hours. For some people, two longish liturgies a day, in the morning and evening, are sufficient, as in the Book of Common Prayer or Common Worship: Daily Prayer. For some of us, however, little and often is best.

One way many Anglicans have found to pray, in this little-and-often sort of way, is through the ‘Little Hours’ of the Daily Office: Terce, Sext and None, at the third, sixth and ninth hours of the day. One of the Anglican books used for this, for many decades was the Monastic Diurnal, a translation of the Latin Benedictine Office, produced in 1933, and edited by Canon Winfred Douglas. Writing in the Preface to The Monastic Diurnal he said:

“The Monastic Office was planned from the first for busy men [sic] … for our frequently overburdened parochial Clergy, it is an ideal Office because it combines great variety with comparative brevity.”

From the very beginning of the separation of the church in England from Rome, many people have supplemented the Offices of the Prayer Book with liturgical devotions at other times of the day. In 1627 John Cosin (later Bishop of Durham), then just thirty years of old, published his Collection of Private Devotions for The Hours of Prayer. It is a beautiful combination of Prayer Book liturgy and language, providing forms of prayer for Prime, Terce, Sext, None and Compline, translated from traditional sources, as well as many other prayers and devotions.

We know too that the community at Little Gidding prayed the psalms throughout the course of the day. There were, no doubt, many other examples of the punctuation of the day with psalmody (see Anglican Devotion, C.J. Stranks, SCM 1961, for the period from the Reformation to the Oxford Movement). The Catholic Revival of the nineteenth century continued this tradition. Many clergy prayed the Western Office in Latin, but soon books of Hours appeared to enable the traditional canonical hours to be prayed in English, using the texts and Calendar of the Prayer Book, and usually providing for the Little Hours to be prayed alongside the Prayer Book Offices of Matins and Evensong. Versions of these books are so numerous that it would be a long list if it was reproduced here. Two traditions predominated among Anglo-Catholics: the monastic version of the Office, as in Canon Douglas’s book, and more popularly, translations of the traditional western Office (before the 1911 reform) which made provision for the recitation of Psalm 119 over the course of each day at the Little Hours. These Offices found their way into the Cuddesdon Office Book and the very popular Prime and Hours, The Priest’s Book of Private Devotion and are recommended in Fr Whatton’s magnificent The Priest’s Companion. For the laity they appeared, in simplified form, in A Manual of Catholic Devotion. 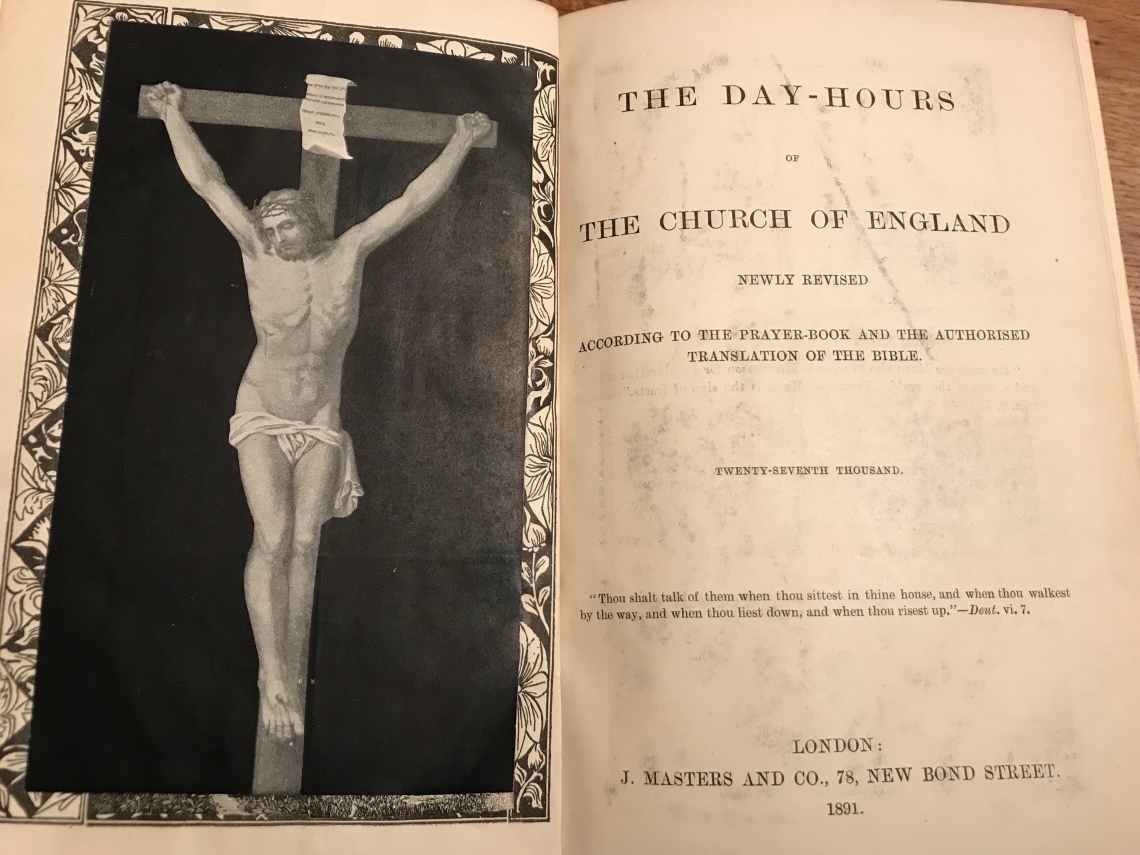 It was the reforms of the Second Vatican Council that reduced the normal Office to a fivefold form, with a single daytime Hour, and Prime removed. However, The Divine Office, the current western (Roman) rite does make provision for Terce and None. Even now, some people use the old books, including The Anglican Breviary (a translation into Prayer Book English of the post-1911 Breviary) to pray a sevenfold, or even eightfold, Office.

I often hear the claim that a Catholic renewal in our Church is not a management issue but a spiritual one. Well, I happen to think that all renewal needs good management. St. Paul was highly efficient. Next week, when I am at the New Wine Leaders’ Conference I have no doubt that I shall be part of something that is superbly managed. But spiritual renewal is needed too. When Anglican Catholicism was at its strength it was a serious enterprise. Fasting, as Newman and Pusey recognised (see my post here), was an essential part of the spiritual life. The praying at regular intervals during the day was the foundation of the energy and mission of countless heroic priests and laypeople. It seems unlikely to me that spiritual renewal will come unless we too embrace these disciplines, as our predecessors did, joyfully.

Like many Catholic Anglicans I have been praying the five-fold Divine Office for all of my adult life. Using it as a supplement to Common Worship when I am in places where that is prayed. When on retreat, and sometimes on holiday, I pray a sevenfold Office using all three Little Hours. In 2014 I added Terce, using Psalm 119 over a week, to end the quiet desk time after my morning prayers and before the workday begins. In Eastertide 2016 I added None to the daily round and in September 2016 a brief Office of Prime. I do so using Psalm 119 (which I have written about here and here) to link myself to Catholic and Anglican tradition. I recently put together a little card to tuck into my Breviary with some simple music and the distribution of the psalms. Common Worship: Daily Prayer also refers to the Little Hours and they could easily be prayed using it.

Here are the cards:

(Music for the opening verses is from Abbot Alan Rees OSB)

Word version here. (You will need to install the St Meinrad fonts to read the music, available here)

Psalm 119 arranged for praying over a week at Terce (or any other Hour) here, in the Grail translation.

The obligation to pray Morning and Evening Prayer is a serious one for Anglican clergy, and they should not be omitted except for a substantial reason. I find it deeply moving on my travels as Superior of the Sodality, and in the diocese of Liverpool as Director of Education, to pray with my sister and brother priests and to know they are praying day by day. Some people choose to add to the basic obligation the praying of the Office of Readings, Daytime and Night Prayer. This is a personal choice, so not of obligation. Just as with fasting, there is always a danger of scrupulosity or adding these devotions as ego-centred ‘works’, this is why a Spiritual Director is so important. We must never forget that we are freely saved and can never merit the salvation Jesus brings – we don’t have to, and can’t, earn it. However, if done lovingly and freely, like a lover who wishes to phone his beloved during the day, not once but many times, or when in the beloved’s presence can hardly resist their touch, this can be a beautiful way of enjoying the divine Presence throughout the day. It is not just a cure for forgetfulness, but a satisfying of the desire and need to be with God intensely.

Just as with fasting there is the suggestion that somehow modern people are not quite up to praying so often. That we are too busy, our lifestyles too full. I am not at all sure about this. I particularly object to the use of the word busy. I think we need to think more carefully about how we use, and control the use of our time. Surfing the web, watching TV, even listening to the news can suck up time. We could all fill our days many times over, but we can, mostly, choose the things that we want to do. Why not choose to spend a few extra minutes with God?

If prayed quickly each Office can be said in three or four minutes, it would be hard to make them last longer than ten. Today, for example, I prayed Terce sat in my car on a street in St Helens, Sext on the same street, after the meeting I was attending and None, outside the school I was due to visit in Garston in Liverpool, a little later. These are, for me, refreshing pauses, Psalm 119 a gentle brook, gently gurgling its way through my day and renewing me. “Happy indeed is the man … whose delight is in the law of the Lord and who ponders his law day and night. He is like a tree that is planted beside the flowing waters.” (Ps 1) The Little Hours are little mindfulness bells, reminding us of the great story of salvation told in Scripture, but they are also a loving touch in the working day with the One who made us and loves us.

Not a passionate love song; certainly not.

It is not the song of love at first sight,

nor of the bitter sweet of emotion and desire.

It is the song of happy married life.

That is not to say that it is, literally, the song of a poet happily wedded; but it breathes all the way through

the charmed monotony of a life vowed to another;

it repeats with endless variety and sweet restraint

the simple inexpressible truth that can never grow weary or stale

every verse of the poem, except the three which introduce it,

contains thou, thee or thine.

And a very large number of them echo: I, me, mine.

Well might its author find the sum total of his song in the high priestly prayer of Jesus:

All mine are thine and thine are mine.”

Serious? Well, yes, but joyful, light and energising, if prayed freely and as a free gift to Him.

B.A . in Theology, University of Southampton

Trained for ordination at Chichester Theological College 1990-1993
Ordained deacon for St Hilda of Whitby, Grangetown, Middlesbrough in 1993 by Archbishop John Hapgood in York Minster
Ordained priest in 1994 in Grangetown by the Bishop of Whitby, The Rt. Rev’d. Gordon Bates

Superior of the Sodality of Mary, Mother of Priests see sodality.com